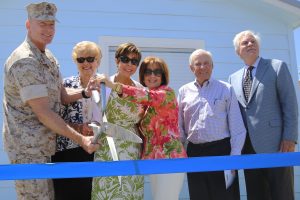 The cottages were dedicated in honor of Col. James Williams, an accomplished Marine pilot who served in World War II, the Korean War and the Vietnam War, and Col. Jack Kelley who had a highly decorated career as a Marine infantry officer in Vietnam and was the commanding officer of 3rd Battalion, 5th Marine Regiment.

Both officers were members of the San Diego Nice Guys, a volunteer non-profit organization that receives donations that provides aid to local individuals and families in need.

The Camp Pendleton Cottage Renovation Project began in 2009 after construction firm Hedges Construction was contacted by a couple who wanted to support Camp Pendleton by replacing the deteriorating cottages at San Onofre Beach.

The new cottages are fully furnished, have a kitchen, a living room, a bedroom and a front porch overlooking the beachfront.

“It’s all about the Marines,” said Brig. Gen. Edward D. Banta, Commanding General, Marine Corps Base Camp Pendleton, Marine Corps Installations – West. “We ask an awful lot of them and providing a world-class recreational opportunity like this is just one of the ways we can make sure they’re taken care of.”

Hedges Construction and the San Diego Nice Guys are still continuing their efforts to replacing the remaining twenty-one cottages at the beach.

“It’s a place that allows you to clear your head and get away from the difficulties of life, some of which might be related to military service,” said Bob Clelland, chairman of the Camp Pendleton Cottage Renovation Project. “We’ve provided for those with physical disabilities handicap-friendly kitchens, toilets and passages.”

“I think some of the wounds that our servicemembers are coming back with are those that you can’t see,” added Clelland. “A peaceful place like this can help heal those wounds.”

This article originally appears on the Official Marines website here.

As seen in the UT San Diego, The San Diego Nice Guys have announced their 2014 Nice Guy Of The Year, T. Denny Sanford. You can read the whole article after the snippet below. Congrats Mr. Sanford.

T. Denny Sanford was selected as the 2014 Nice Guy of the Year after acing his interview with a committee of club members.

He accepted the honor, though, only after the group passed his inspection.

“I didn’t know a whole lot about them,” said Sanford, a philanthropist and part-time La Jolla resident.

The Nice Guys, a civic club that gives one-time financial grants to people in need, quickly won his approval.

“I think so highly of this organization,” he said Wednesday, when the club announced Sanford’s selection. “They do tremendous things in a wonderful way.”

The Nice Guys Christmas event in the news. Read the article below then see the full photo gallery here: http://www.utsandiego.com/niceguys 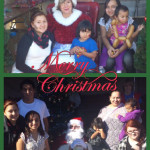 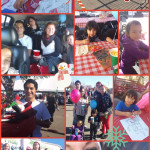 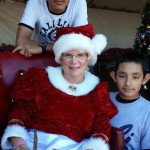 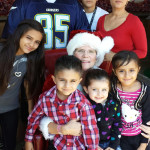 Christmas at Petco Park Article in the UT 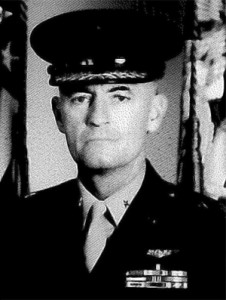 The first thing you should know about our Irishman of the Year, Mike Neil, is that, rather than ride in a convertible as our honorees usually do, he insisted that he instead march with the Friendly Sons of St. Patrick. The Friendly Sons have appointed him their “Parade Master for Life,” so in this year’s Parade you will see Mike leading the lads and their precision marching unit as he has done so well for over 20 years.

For the record, Brigadier General Michael I. Neil was born in Long Beach, CA and graduated from San Diego State University in 1962 with a B.A. degree in Pre-Law, and an L.L.B. degree from Boalt Hall School of Law, University of California at Berkeley in 1966. After completion of Office Candidates School at Quantico, VA, he was commissioned a second lieutenant and upon graduation he was ordered to the 1st Marine Division for duty in the Republic of Vietnam.

He served as a platoon commander with Company D, 15th Battalion, 7th Marines and was awarded the Purple Heart for wounds received in action and later received the Navy Cross as a result of combat action. He then became an aerial observer assigned with the Air Observer Section, 1st Marine Division at Marble Mountain and was awarded six Air Medals. Returning to the U.S. in July, 1968, he was assigned to the Marine Corps Recruit Depot, San Diego, for duty in the Office of the Staff Judge Advocate serving as both a defense attorney and prosecutor in the legal offices of MCRD, until his release from active duty March 1970. 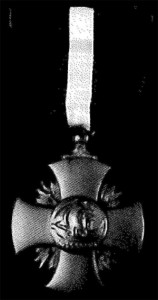 The Navy Cross: The second highest award for combat bravery the United States Navey can bestow.

Thereafter he attended the Reserve Amphibious Warfare School, the Reserve Command and Staff College, participated in the Reserve Counterpart Training and served as the Officer-in-Charge, Battalion, 7th Marines as the Battalion S-3 Tactical Exercise Control Group for the 5th Marine’s Combined Arms Exercise at the Marine Corps Air Ground Combat Center, Twentynine Palms, CA. He was then assigned to extended active duty with 1st Marine Amphibious Force, serving as Executive Officer of the Exercise Control Group Freedom Pennant I and II in Perth, Australia.

He served as Commanding Officer, 4th Tank Battalion located in San Diego and then with the 1st Marine Expeditionary Force Reserve Augmentation Unit as the Assistant G-3 for Plans, participating as Commanding General, IMEF during war games, including the annual Global War Game at Newport, RI. He was promoted to Brigadier General in 1989. In September, 1990 he took command of Camp Pendleton as a result of Operation Desert Shield. At the time of his retirement on August 1, 1993, General Neil was the Assistant Division Commander of the 4th Marine Division.

In civilian life he is president and lead attorney of the law firm of Neil, Dymott, Frank, Mcfall & Trexler, specializing in civil litigation. He and his wife Jan have two children, Megan Louise and Sean Brendan.

We also depend on generous supporters such as yourself. If you would like to contribute to this worthwhile organization, please Donate Here and follow the simple instructions.
More...
San Diego Nice Guys
Copyright © 2021 All Rights Reserved
Site by Web Sights R Us