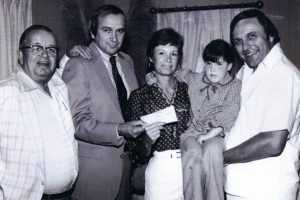 Family is the main focus of the Nice Guys. The majority of the money we raise goes to help families who have somehow “fallen through the cracks.” A medical bill, a car repair, clothes needed after a house fire, a wheelchair for a young man injured while being a Good Samaritan – this is the type of assistance offered by the Nice Guys. Our goal is always to get people back on their feet and to be, once again, self sufficient.

“Offering a hand up, not a handout.”

THE STORY ON HOW WE GOT STARTED

In 1979, a small group of businessmen met for lunch at a local restaurant. The conversation was the usual – business, sports, politics. One of the men mentioned they heard about the plight of a family who had traveled across country looking for a cure for their son stricken with leukemia. They were on their way to Mexico where they had heard a new treatment existed that might help their son.

Having run out of money, the family was in desperate need of living expenses. Moved by the family’s situation, the businessmen reached into their pockets and came up with enough cash.

The men decided to help this family!

The Nice Guys organization began that day, and has been quietly serving the good citizens of San Diego ever since. The main focus has always been to assist families and individuals who cannot meet life’s demands. For more than 40 years, the Nice Guys have continued to make a difference in peoples lives by offering a hand up.

……..Tragically, the treatment failed (the boy died), but that was the beginning of the Nice Guys.

The Nice Guys, now with a membership of around 175 men and women, is strictly a non-profit, charitable organization with no paid staff.

When it comes to serving the community and taking social responsibility, the Nice Guys have gone quietly about their work. It’s only recently that some San Diegans have even heard of the Nice Guys. Only rare mention was ever made of this organization in the media. But now, with increased need, the Nice Guys have become more visible in an effort to raise more money to come to the  aid people within the San Diego community.